USE AND EFFECTS OF OPIOID DRUGS

Opioid agonist drugs have a range of pharmacological actions such as:

The use of opioids can also produce side effects such as:

The onset of Heroin withdrawal may start as early as 4 hours after the last dose and reach a peak at 28-48 hours. The worst withdrawals are usually over by the 4th day and withdrawal usually resolves after 5-10 days. Some symptoms of withdrawal are more unpleasant than others. Hanging out is never easy and craving for the drug does not mean that you have to have the drug.

Withdrawal from a long-acting opioid such as methadone usually commences 36–48 hours after the last dose. The peak severity of withdrawal tends to be lower than for

Heroin withdrawal, but withdrawal may be more prolonged, lasting 3–6 weeks.

Symptoms commence generally within 3–5 days of the last dose and can last for several weeks.

Listed below are some of the symptoms you may or may not experience when you are withdrawing.  Some feel worse than others – following acute withdrawal, you may experience low grade symptoms of discomfort, both physical and psychological which may last for many months - all of them will pass in time.

Heroin, Methadone, Oxycontin, Endone and over the counter medications with a Codeine content. 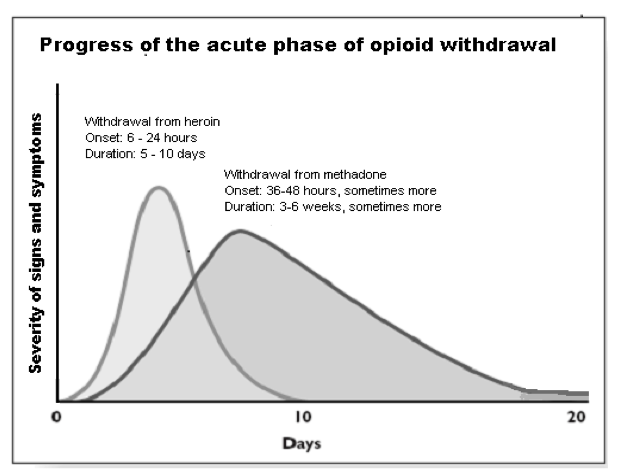